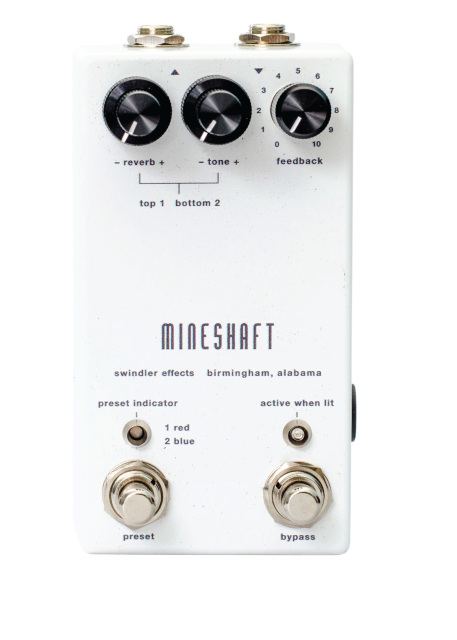 Peer into the dark; down into the ominous depths, where an echo hints at something unknown and then slowly drifts away. We crafted the MINESHAFT REVERB to get you down there, and it's the first of its kind.
Boasting rich, spacial tones that can range from a subtle wash to a thick, ambient soundscape, this small reverb packs a serious punch: especially when you consider that dual knobs allow the user to select two different Reverb mixes and Tone levels (controls from left to right are: Reverb, Tone, Feedback).
Pressing the left soft-touch footswitch will toggle between the upper and lower knob settings (RED light for upper knobs, BLUE light for lower knobs). Yep. That's TWO reverbs in ONE small box.​​
Oh, and we almost forgot. Holding the ​soft-touch, true-bypass on / off switch will throw the reverb into a wild runaway oscillation based on where the reverb level is set. We are proud of the Mineshaft and we think you are going to love it. Go ahead and buckle up, though. It's a long way down to the bottom.